Most vibration problems on equipment are due to thermal, mechanical, acoustic, or flow related excitation – and if left unchecked, will cause fatigue, and subsequent equipment failure, which may lead to greater repair costs.

Components vibrate at particular natural frequencies. These frequencies and resulting mode shapes can be found using modal and vibration analysis. Often, simple analysis can be performed, while for more complex systems, finite element analysis is performed to determine the dynamic response.

Once vibration and thermal/ fatigue issues are identified, we recommend solutions to ensure structural integrity. Examples include: 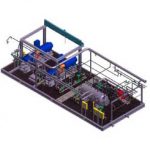 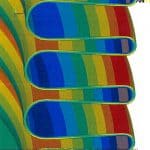 Fatigue (from cyclic loading) is one of the most frequent causes of failure in pressure vessels, piping and process equipment. A vibrating component or system often leads to fatigue – which eventually leads to equipment malfunction, or catastrophic failure. Fatigue cracks usually initiate at the surface, and for this reason, the condition of the surface and the environment are important factors influencing fatigue behavior.

One such paper is Code Design and Evaluation for Cyclic Loading – ASME Sections III and VIII.

We perform fatigue analysis of non-welded and welded components. Fatigue analysis is performed per ASME Section III Class 1 and Section VIII Division 2. The fatigue design life evaluation procedures in Section III of the ASME Boiler and Pressure Vessel Code were originally developed in the U.S. Naval Nuclear Program. Those involved were Bill O’Donnell, (Bernie) Langer, W.E. (Bill) Cooper and James (Jim) Farr – who, in the late 1950’s and early 1960’s developed the initial formulation of this technology in the Tentative Structural Design Basis for Reactor Pressure Vessels and Directly Associated Components, which became known as “SDB-63.”

Section III of the ASME Code “Vessels in Nuclear Service” was the first to include specific Code rules to prevent low cycle fatigue failure. Its first edition was published in 1963; Section VIII, Division 2, “Alternate Rules for Pressure Vessels” followed in 1968.

We perform vibration analysis – as well as fatigue & failure analysis on components for clients in industries including energy, manufacturing and (onshore/ offshore) oil & gas.
Our analysis includes: 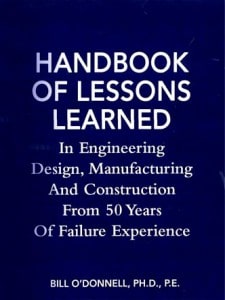