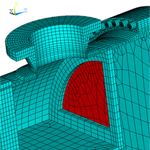 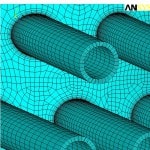 What is finite element analysis?

Finite element analysis (FEA) is a computer simulation method useful for evaluating components, structures and systems. It is a versatile and powerful tool that models simple and complex geometries, in conjunction with linear and non-linear materials(1), and variable loading conditions to determine stresses, displacements and deformations, temperature distribution, dynamic behavior, vibration characteristics, and more.

FEA was initially developed in the 1950’s and is currently used throughout industry and government organizations to evaluate compliance to safety codes and standards.

Why do I need FEA?

Finite element analysis, when properly applied by experienced experts, is the most efficient and accurate method for determining the detailed response of a component, structure, body, etc. to a set of imposed loads and constraints.

Using FEA, alternate design concepts can be evaluated relatively quickly and easily in comparison with the fabrication of prototypes and physical testing. Safer, more robust and economical designs can be achieved through the application of FEA.

Finite element analysis is used not only for design. In the unfortunate case of a failure, it is also a useful tool for helping to identify causation or evaluating proposed theories of failure – and subsequent redesigns.

Practical finite element analyses requires sophisticated software. There are various commercial and non-commercial software programs available, with varying capabilities. The entity to be analyzed needs to be represented mathematically, such as by way of a three-dimensional Computer Aided Design/Drafting (CAD) model. The CAD geometry model is subsequently discretized into small finite segments referred to as finite elements. Field equations governing the behavior of the entity are applied to each element and compatibility between adjacent elements is mathematically enforced.  All of this is done by the FEA software.

What do I get out of a finite element analysis?

Analysis results are most commonly presented as color contour plots and or displaced shapes of the result(s) of interest (e.g. stress level or displacement magnitude, etc.). With this approach, critical regions can be quickly identified. The quality of FEA results is highly dependent on the veracity of the input data. FEA models/analyses results should always be assessed against results obtained with classical engineering equations or other known solutions. In complex analysis cases, this will often require additional analyses to be completed specifically for these “model validation” activities.

More and more, product suppliers and end users are recognizing the benefits of FEA and are requesting this type of design assessment from manufacturers and fabricators. With the ever increasing speed of personal computers and accessibility of cloud-based computing to both individuals and large corporations, FEA has become a standard tool for anyone involved in design/ component/ system/ structure evaluation. Software companies are responding by integrating simulation tools directly within the CAD environment along with the ability for “instant” physics simulation.

As with any other tool, it is important to understand the limitations and proper use of FEA. Anyone can perform a finite element analysis; getting it done right, however, requires good bookkeeping skills, attention to detail, and a critical eye.

(1) In elastic behavior at low loads, the material responds linearly with an applied load – continually increasing the load creates the same proportional increase in deformation. Releasing the load allows the part to retract to its original shape – making it a linear response. However, if a much larger load is applied, the part becomes plastically deformed. Once this occurs, it’s response will be nonlinear – meaning that the same increase in load results in less deformation until failure.

Read The Technical Description of FEA.