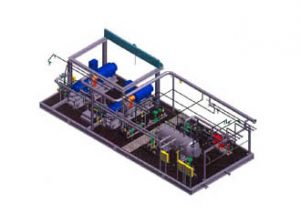 We performed finite element analysis to determine the structural integrity of a Vapor Recovery Unit (VRU) base skid to ASME Code. The VRU package was to recover process vapor for use as fuel gas – for a plant near Fort McMurray, North Alberta Canada. The equipment included motors, compressors, a separator, heat exchanger, instrumentation and controls, piping and valves, and miscellaneous components. The base skid will also support the utility building in which the system will be located.

The combined VRU Base Skid and Utility Building entity is approximately 55 ft (16.76 m) in length, 23 ft (7 m) in width and 18 ft (5.5 m) in height. Design criteria for the base skid structure was obtained in part from the 2006 Alberta Building Code.

Three-dimensional finite element analyses were performed for various individual and combined load cases. The resulting axial tensile and compressive forces and stresses as well as bending moments and bending stresses from these analyses were compared to corresponding allowable stresses according to design criteria. Modal analysis was also performed, excluding the piping and the surrounding building.

Piping is considered in the skid analyses with its weight contribution and other loads it may apply to the skid (reactions to external loads and thermal loads). Piping materials are either carbon steel or 316 SS.

It was concluded that additional supports were required. The final design was found to be within allowable stress criteria.

We perform design, analysis of equipment to codes including API, AWS and ASME.