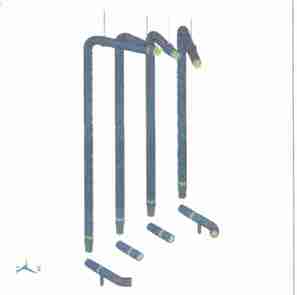 We performed a structural analysis of Fiberglass Reinforced Plastic Piping (FRP) for use in a Flue Gas Desulfurization System in a power plant in Vietnam.

To investigate the behavior of the recycle slurry piping, we created a three-dimensional finite element model using ANSYS. Four separate piping runs, designated according to their associated recycle pump identification number comprise the external portion of the recycle slurry piping. Each piping run is similar in layout and geometry, but has differences at the beginning and termination of each run.

We used the following methodology and assumptions:
1) Small diameter drain lines and vents attached to the large diameter piping was not included in the finite element model(s).
2) Valves and pumps were not included in the models.
3) Flange and field joints were not explicitly included in the piping models.
4) The piping is supported at various locations with vertical spring hangers. The springs were assumed to resist movements in the vertical direction only.
5) Expansion joints were model with a combination of beams, springs, and gap elements.
6) All material behavior was assumed to be linear elastic.
7) For Seismic loading, Occupancy Category of II, the seismic use group was assumed to be I. Zone 1 was assumed with the worst soil profile.
8) The allowable axial stress is based on an ultimate tensile strength of the FRP piping of 9000 psi.
9) Design pressure = 60 psi
10) Design temperature = 180 F

We perform design and analysis for clients in industries including petrochemical, mining and energy.

Give us a call – Let’s talk about your needs.