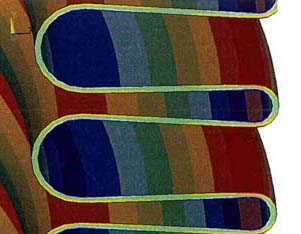 We were requested by a client to perform a stress, vibration and fatigue analysis on a bellows design. The 28-convolution bellows was intended to last for 5 years, or 13.14 billion cycles. The bellows assembly is installed in a vertical orientation with its bottom end stationary. The bellows top end is subjected to a load that causes its top end to move in a circular motion. Both bellows ends remain parallel at a constant distance apart at all times.

The resulting motion from the load placed upon this assembly causes the top end to circle around the bellows axis at a radius of 5 mm with a speed of 6,000 rpm. Furthermore, OCEI was to evaluate the natural frequencies of the bellows for comparison with the assembly operating (exciting) frequency.

Finite element modeling and analysis were used for stress and fatigue evaluations. ANSYS was used to construct the models and perform the analyses. All geometry and operating data were provided by the client. A three-dimensional model of the entire bellows, including all 28 convolutions and both ends was constructed. 3-D solid elements were used to simulate the bellows.

The material properties were obtained from the ASME Code Section II, Part D. The finite element analyses included two different types of analysis; 1) structural/fatigue analyses, 2) modal analyses. The structural/fatigue analysis involved performing a stress analysis to determine the stress distributions during a typical rotation cycle. The largest alternating stresses were then used to perform the fatigue analysis to determine the life of the bellows. Natural frequencies of the bellows design were obtained from a modal analysis of the assembly.

Bellows convolutions and ends are geometrically symmetrical about any vertical planes through its axial centerline. However, the applied horizontal cyclic load acting on the top end, at any given time, is symmetrical only about the vertical plane that includes the applied load. Due to this symmetry condition, only one half of the bellows assembly is modeled and analyzed. The image above shows a close-up view of the radial stress (X-Dir).