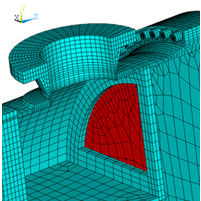 We performed ASME Section VIII Division 1 analysis on a Low Pressure Feedwater Heater using ANSYS finite element analysis (FEA). The vessel is essentially symmetric about the vertical centerline plane; therefore, only one half of the unit was modeled. Since the vessel is modeled with three degree-of-freedom solid elements only, X-direction translations are required to be constrained to achieve symmetry on the vertical plane. The Feedwater Heater and its components are comprised of carbon, stainless and Cr-Mo steels.

The following assumptions were used:
• Linear elastic material behavior with small displacements
• The geometry, loading and boundary conditions consistently have one plane of symmetry down the axis of the vessel. Then analyses were completed on a half model of the heater with symmetry boundary conditions applied on the cut boundary. Nozzle N5 was treated as having half symmetry.
• The tubesheet was modeled as solid material, with appropriate adjustments in the values of Elastic Modulus and Poisson ratio to account for the effects of the holes at a representative 400°F.
• No credit was taken to increase the ligament efficiency for the effect of tubes
• The evaluation allowable values were conservatively taken at 450°F

The cover, channel, channel flange, gasket, tube sheet, and tube joints of the Low Pressure Feedwater Heater were evaluated for stresses and displacements. Each of these items was found to satisfy the design requirements.

Shown above is a closeup section of the finite element model of the feedwater heater (tube not shown).

We perform thermal, stress, vibration and fatigue analysis to ASME Code on equipment including vessels, piping, valves and mixers.