The generally accepted beginning of finite element analysis occurred in the late 1800’s, when John William Strutt Rayleigh developed a method for predicting the first natural frequency of simple structures. This was done by assuming a deformed shape for a structure, then quantifying the shape by minimizing the distributed energy in the structure. Walter Ritz then expanded this into a method – now known as the Rayleigh-Ritz method, for predicting the stress and displacement behavior of structures.

The choice of assumed shape was critical to the accuracy of the results and boundary conditions. Unfortunately, the method proved to be too difficult for complex shapes because the number of possible shapes increased exponentially as complexity increased. This predictive method was critical in the development of FEA algorithms in later years.

By the 1940’s, numerical methods had been developed to predict behavior of more general structures. These were frame and truss based – from Hrenikoff, and later utilized energy methods from Alberto Castigliano and William Rowan Hamilton. In 1943, Richard Courant proposed breaking a continuous system into triangular segments. About that same time, the 1940s also saw the “birth” of digital computing with the unveiling of ENIAC at the University of Pennsylvania.

This room-sized computer was commissioned by the U.S. Army to calculate ballistic trajectories during WWII. The computer used electromechanical devices for data storage and vacuum tubes for calculations, and required a team of operators to keep it running at a maximum processor speed of 46 operations per second.

By the 1950s, analog computers had been developed to process more complex structural problems. With the promise of more powerful computers, analytical methods were advanced to include matrix based solutions of frame and truss structures.

The next significant step was taken by Boeing in the 1950’s when they used triangular stress elements to model airplane wings. The benefit to the growing aerospace business was clear and most major manufacturers in this industry were developing in-house programs for structural analysis on computers.

The basic concept of finite elements was thus born, although the process was still time consuming and limited. In 1960, Dr. Ray Clough coined the term “finite element.” The 1960s saw the true beginning of commercial FEA as digital computers replaced analog ones with the capability of thousands of operations per second. However, most codes were still industry, company, and even product specific. Zienkiewicz and Cheung (4) wrote the first book devoted to the finite element method in 1967.

In the early 1960s, a small analog computer manufacturer for the aerospace industry was awarded a contract from NASA to develop a general purpose FEA code. This company, The MacNeal-Schwendler Corporation (MSC), ensured the growth of commercial FEA by developing what is now known as NASTRAN.

This original code had a limit of 68,000 degrees of freedom, which was believed to be larger than anyone would need. When the NASA contract was complete, MSC continued development of its software, called MSC/NASTRAN, while the original NASTRAN became available to the public. About the same time period, other software packages were being developed – including ANSYS, MARC and SAP. However, computing power at this time was quite limited.

By the 1970s, minicomputers were developed, and were more powerful than earlier mainframes. However, developing solutions to complicated problems was still too resource intensive for more casual users despite the enhancements in hardware. In the 1980’s, developments in graphics processing left their mark on FEA as graphical `pre’ and `post’ processors became available and engineers could examine colored stress contours instead of studying tabular output. Thanks to this advancement, design engineers began to seriously consider incorporating FEA into the general product design process.

In the late 1990s, the PC platform became a major force in high end analysis. Models with 1 million degrees of freedom were being run on “deskside” supercomputers capable of running 1 trillion operations per second.

Tom O’Donnell and our other Senior Engineers perform finite element analysis to API, ASME and other Codes.

Give us a Call to Discuss your Engineering Challenges. 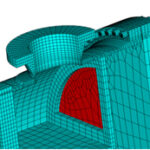 For a client that manufactures components for Formula One Race cars, we performed engineering analysis and design optimization on new brake rotor designs. 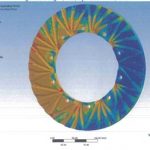 We performed failure analysis on a cracked heat exchanger for NASA and performed subsequent design modifications.