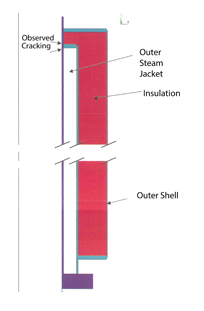 We were asked to perform a failure analysis on a Thin Film Heat Exchanger (TFHE) – which is used in conjunction with other components in high temperature coating applications such as caramel coated popcorn. The client had found cracks in their units.

They had requested an evaluation of their TFHE units due to recent design changes and the operational practices of their customer. We performed an engineering and finite element analysis (FEA) to determine the root cause of the cracking, and make recommendations.

The FEA model was developed using the following assumptions:

(1) The TFHE is essentially an axisymmetric structure, not considering the various inlet and outlet nozzles. An axisymmetric finite element model of the TFHE was constructed using the ANSYS finite element analysis software. Welds were not explicitly included in the model.

(2) Two types of stainless steel are used in the construction of the TFHE: ASTM A316L and ASTM A304. Temperature-dependent Elastic Modulus and Mean Coefficient of Thermal Expansion data are the same for these two materials, as is the 2004 ASME Boiler and Pressure Vessel Code fatigue design curve (for < 1 M cycles). Slight differences exist in thermal conductivity and material strength.

(3) Two thermal analyses were performed. The first examined normal operating conditions and the second emergency or end-of-day shutdown procedures. The results of these analyses were used as input for the structural analysis.

The FEA results determined that the use of cold flush water when shutting down the TFHE – either at the end of the day or due to a problem in the process line created high stresses in susceptible regions of the outer cylinder assembly structure. Repeated application and removal of these high stresses caused fatigue damage, and ultimately a low cycle fatigue failure.

The addition of the insulation on the outside of the TFHEs (relative to previous designs) increased the temperature of the outer steam jacket wall, which in turn created a larger temperature difference between the inner and outer walls and a corresponding increase in stresses at the sites of observed cracking. We provided design and operational changes to the units to ensure structural integrity.

We perform design, analysis and troubleshooting services for clients in industries including the pharmaceutical and food industries.