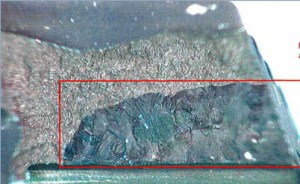 Metallurgical testing and analysis to determine the cause of failure on two third- stage blades which failed after 11,00 hours in service

Therefore the fracture appeared to have occurred in two stages, with the dark oxidixe portion being the first. This is an area of stress concentration for the loaded blade. The failure occurred at the trailing edge of the blade.

The fracture surface of the broken turbine blade was examined using a scanning electron microscope (SEM) equipped with an energy dispersive x-ray spectrometer (EDS). No evidence of creep or fatigue was observed at any location.

The broken blade appeared to have failed as the result of impact damage or overload that occurred in two distinct stages. The evidence indicates a brittle crack initiated in the base of the blade that did not propagate all the way through the thickness of the blade. This primary fracture existed for some time and developed a thin black oxide layer. At some time later, the crack developed all the way through, possibly as a result of overload. Stress concentration at the leading edge likely contributed to the crack initiation.

We perform Failure Analysis for clients in industries including manufacturing, petrochemical and energy.