Corrosion Investigation on Various Structures in a Refinery 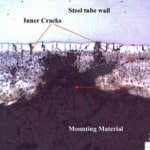 We were asked to investigate corrosion in various structures of a refinery and make subsequent recommendations for remediation.

During the inspection of the conveyor and other structures, heavy corrosion was discovered – in some areas over 30% thickness loss of the base material. The facility was placed in service in 2002 and was in continuous services until a scheduled turnaround in 2007. Continuous service means that the facility is scheduled to receive warm petroleum coke from a coke pit for least part of a 24 hour day, 365 days a year.

Even when the water evaporates, the corrosive contaminants of the water remain on the surfaces. Later during higher humidity periods, these contaminants can absorb moisture from the air. Therefore, all interior surfaces of the galleries can be considered to be continuously exposed to a corrosive electrolyte.

The corrosion inhibitor currently being added to the service water was of minimal value for protection of the steel structures, due to presence of coke particles and corrosion products. Generally, the coating system has failed at many areas of the interior surfaces of the conveyor galleries. The failure mode is primarily corrosion activity at the pinholes, resulting in delamination of the coatings by cathodic corrosion products. This will eventually fracture the surface of the coatings and expose more substrate.

The corrosion is further aggravated by the abrasive effects of the petroleum coke material being transported by the conveyors. The material presents a very abrasive surface to the bottom of the conveyor galleries during cleanup operations.

The abrasion effect is a double-edged sword, as it is capable of eventually removing coatings, especially at locations where there is an upset in the interior surface, such as at a welded joint and is also easily capable of removing scale and other corrosion products, exposing the steel to the effect of increased contact with the reactive service water.

Our Team performs investigations on equipment operating issues including corrosion and vibration.