Description and Experience
General corrosion is the thinning or wastage of a metal, more or less uniformly by chemical attack (dissolution) at the surface, by an aggressive environment [1]. Some consequences of such damage are wall thinning (which in the case of tubes or pipes can cause rupture or leakage), reduction of cross-sectional area of bolting (leading to failure), metal removal from valve seats (causing leakage), and buildup of corrosion products which can result in turbidity and other problems. Steam generators have experienced wall thinning [2 – 4] as have carbon steel tubes in feedwater heaters [5], and tubes in steam condensors [6]. Steam separators, reheaters and steam piping have also experienced general corrosion, but more in the mode of erosion corrosion [7].

Material Selection, Treatment and Testing
Materials and environment combinations have been categorized [1] with regard to surface metal removal (penetration) rates. Generally, corrosion at less than 0.005 in/yr is considered reasonably low, depending on design specifics of the component being considered. High tolerance components such as valve seats and pump shafts will need more corrosion resistance. In some cases, tanks, piping and valve bodies can operate with higher corrosion rates, when compensatory wall thickness is added in design. Corrosion rates at greater than 0.05 in/yr should be avoided by judicious material selection and control of the environment.

Higher Cr, Mo and Al content in alloys can serve to reduce corrosion [1]. Also, the use of small additions of Cu or Ni to carbon steel for added corrosion resistance is common, especially for applications with impure water. In cases of extreme general corrosion, stainless steel may be required; however, this can lead to other potential problems such as stress corrosion cracking in cases of relatively high oxygen water at greater than approximately 200°F [8]. Other alloys which are considered to be passivated and resistant to general corrosion, similar to stainless steel, are alloys with greater than 30 to 40% Ni in Cu-Ni and greater than 8% Cr in Cr-Co [1], although these alloys may also experience problems in certain applications [6].

Materials may also be made resistant to corrosion by cladding, coating, and cathodic protection, where appropriate [9]. The life of equipment can usually be accurately assessed based on simple immersion tests. However, at times the plant operational conditions can lead to environments which may be more severe than those anticipated.

A number of general design rules should be followed, where possible, to avoid increasing the potential for corrosion problems [9]. Tanks should be designed for easy drainage, cleaning and replacement of critical parts which may experience degradation.

Long-term leakage and incompatibility with lubricants and the environment can lead to bolting wastage. Other factors to consider in design and materials application engineering include lowering the temperature and fluid velocity (although stagnant flow regions should be avoided) to practical limits in order to reduce corrosion tendencies [9].

A major remedy is in material selection and replacement of corroded parts, as discussed above. Temperature and fluid conditions can also be controlled, as discussed. Water purity campaigns can also be implemented. Sulfates and halogens which can exacerbate corrosion should be avoided. Inhibitors (to scavenge oxygen) can be added, although this must be done carefully as other problems can arise. Proper pH and the venting of CO2 and H2S gases, where [9, 10] applicable, can also mitigate corrosion.

Oxidizing environments during plant startup or extended downtime should be avoided when possible. The system should be protected by an inert environment during extended outages, where practical. 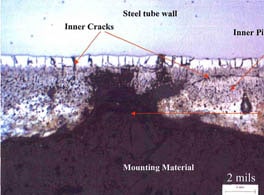 O’Donnell Consulting was engaged to investigate corrosion in various structures of a refinery and to make recommendations for remediation. During the inspection of the conveyor and other structures, heavy corrosion was discovered – in some areas over 30% thickness loss of the base material.