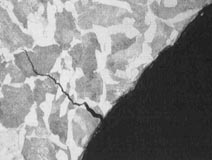 A root cause investigation was performed on a failed coupling end of a 6-inch bore hydraulic cylinder of a 30 ton automotive forming press.

We perform failure analysis services for clients in industries including petrochemical, manufacturing and automotive.