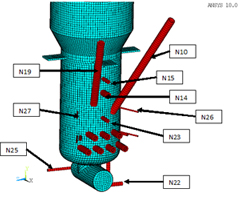 The vessels were designed to Section VIII, Division 1 of the 2004 ASME Boiler & Pressure Vessel Code (with Addenda A2005). The DMR vessel is subjected to thermal gradients, cyclic loading, and creep behavior, which cannot be adequately evaluated using Section VIII, Division 1 of the ASME Code. We thus evaluated the vessel  for thermal, fatigue, and creep conditions using other sections of the ASME Code which provide explicit acceptance criteria for these types of loading conditions.

Static strength and fatigue strength were evaluated using Appendices 4 and 5 of Section VIII, Division 2 of the ASME Code, respectively. Appendices I and T of Section III, Division 1, Subsection NH were used in evaluating the vessel for creep rupture/creep fatigue damage interactions, and strain accumulation, including creep ratcheting. The various load stress limits of Division 2 were used with the allowable basic stress limit of Division 1.

For over 30 years, Our Team of Engineers has been performing design and analysis of vessels to ASME Code..