1.1 Background
For decades, elastic analyses have been used to design steam boilers and pressure vessels. The design was considered acceptable provided that stress averaged through the wall of the vessel did not exceed allowable limits. Simple formulae were given in the codes to obtain the stresses by hand calculations. Corrective coefficients were also provided to include the effects of bending, as, for example in the case of dished ends or plates. Since the major concern was focused on limiting average membrane stresses, the relations used to calculate stresses for comparison with the allowable were the same for elevated temperature service as for temperature service below the creep regime.

The need for additional checking of the effects of bending and thermal stresses was left to the individual judgment of the designer. In most cases, the calculations were simply restricted to mechanical load effects mainly related to pressure stresses. The allowable values of stress given in the Code were intended to provide sufficient safety margins to compensate for inaccuracies and omissions of such evaluations. These design-by-formula methods used the maximum stress criteria still in common use. It is recognized that, even for vessels where creep can be ignored, the use of such design methods should be restricted to thin wall structures where thermal stresses are of negligible importance and where the assumption of quasi-steady loading provides a good engineering approximation.

The critical importance of fatigue as the limiting failure mode of most pressure vessels has only recently been fully recognized. The design-by-formula approach does not control fatigue damage since such damage is caused by local stress and strain conditions not considered in the membrane stress formula. The local maximum range of von Mises shear strain is the most important determinant of low cycle fatigue damage, with the local stress conditions contributing to a mean stress effect.

1.2 Elevated Temperature Design Concerns
Recognizing the importance of fatigue in vessels operating below the creep regime, one can fully appreciate difficulties inherent in the design of vessels for elevated temperature service. The higher temperature to which these vessels will be exposed allows larger temperature ranges at each point in the vessel, and larger temperature differences between different structural elements of the vessel. This results in larger total strain ranges. At the same time, elevated temperature reduces the yield strength of the material, increasing plastic strain concentration effects. Creep adds to the inelastic strain concentrations and fatigue damage. The net result is an increase in the thermal fatigue loading conditions and a reduction in the fatigue resistance of the material. Fatigue is therefore a much more limiting potential failure mode for vessels in elevated temperature service.

Most elevated temperature pressure vessel steels can also be susceptible to rupture at low creep strain levels. Creep strains tend to concentrate in the grain boundaries, particularly at low creep strain rates where the grains have more resistance to flow. Thus, the strains at the grain boundaries may be very high, even when the engineering or continuum strains are quite low. Voids tend to form and coalesce into intergranular cracks, which can result in rupture at low engineering strain values. This introduces the need for strain limits for elevated temperature vessels, whereas the ductility of most pressure vessel steels is such that no strain limits are needed at temperatures below the creep regime. This problem is exacerbated by the phenomenon of creep ratcheting, which occurs at stress levels far below the stresses that produce plastic ratcheting. Thus, even when a vessel is designed to low pressure stress levels that produce negligible creep, enhanced creep due to thermal cycling is a significant practical design consideration.

The phenomenon of creep rupture introduces another serious potential failure mode at elevated temperatures. The existence of high stresses for long times at elevated temperatures damages most pressure vessel steels. The integrated ratio of the time at stress to the time to rupture at the same temperature and stress level is commonly used as a measure of creep rupture damage. The mechanism of this damage from a metallurgical point of view is not well explained. The relation between this type of damage and the exhaustion of ductility described previously is also not clearly understood at this time. Whereas the stress intensity as defined by the von Mises approach appears to cause more creep rupture damage for certain materials in certain temperature and strain rate regimes; maximum tensile stresses cause more damage in other regimes. The difference is important at notches where the maximum tensile stresses are usually higher than the von Mises stress intensity.

These criteria are quite flexible and permit the analyst to optimize the design for the particular materials, fabrication details and anticipated time-temperature-pressure loading history. These methods also allow the vessel user to evaluate the effects of any periods of operation above the anticipated operating temperatures and/or pressures, so that the total damage can be kept within allowable limits during the safe useful life of the vessel.

1.3. Design Tools
Computer capacity and finite element numerical methods have developed to the point where it is common practice to perform elastic design ,analysis of stresses and strains in pressure vessels. For the range of operating temperatures where creep effects are negligible, the time history used in design analyses need include only the number and rates of change of the transients. The hold times have no effect on the results below the creep range, provided, of course, that they are long enough to separate the prior transient effects from the subsequent transient effects. The total operating time also has no effect, provided that there are no metallurgical time-dependent mechanisms of importance.

In elevated temperature service, the material creeps and suffers damage when subjected to stress during long term operation. The duration and sequence of events become important; the functional ability of the structure may be affected and additional failure modes have to be considered. Moreover, creep effects are non-linear in time, thus increasing the complexity of design analyses by an order of magnitude.

Closed form solutions for creep problems are scarce, and the use of inelastic finite element analyses would seem to be. the natural continuation in development of analysis methods for pressure vessels for elevated temperature service. However, this has not proved to be the case in practice. Bounding, solutions that make use of elastic analyses have appeared to be more practical and reliable in design applications.

The incremental nature of finite element creep analyses makes them very time-consuming. Such design analyses can only be reliably performed by skilled, experienced people. The use of valid constitutive equations for cyclic loading with plastic–creep interactive effects is essential, Simple errors in the very complex and multiphase computer calculations may not be easily noticed in the results. Even with accurate results for a few cycles, the problem arises that extrapolation to perhaps hundreds of cycles is needed, since it is not feasible to perform time-history incremental, creep analyses for the entire life of the vessel.

The option to perform full inelastic analyses is therefore given to the analyst as a possible tool, with the understanding that this approach has generally proved to be cumbersome. Recommendations for performing such analyses, including a realistic approach to material models, have been developed. Criteria for evaluation of the acceptability of the resulting stresses and strains are also available.

Simplified design analysis methods based on energy dissipation and reference stress methods have been developed in the United Kingdom, and bounds involving elastic core solutions have been extensively developed and applied in the United States. The latter have been used to design a wide range of pressure vessels and piping components for elevated temperature service.

This chapter focuses on the methods now being used in the United States for :the design of pressure vessels for elevated temperature service. After a few remarks about the historical evolution of the design approach in the ASME Code, the failure modes of greatest concern at elevated” temperature are summarized. The basic principles supporting the ASME Code criteria for pressure vessel design are then described, and the fundamental criteria used to evaluate the structural integrity of components are discussed.

An essential portion of the chapter is devoted to bounding solutions based on the concept of an elastic core in structures subjected to complex loading histories in the creep regime. Extended use of the bounds for histories including non-uniform loading cycles, some of which are severe enough to .produce plastic ratcheting, is explained.

Elastic follow-up is usually considered as a phenomenon related to piping design. The example of ligaments in steam generator tubesheets is used to describe local elastic follow-up in vessels. Methods of bounding inelastic strain concentration for monotonic and alternating loading are given.

The creep fatigue and creep rupture data base for evaluating damage for elevated temperature service are described. A general consensus has not yet been reached on a number of questions involving plastic and creep interaction effects in fatigue, and on summation of fatigue and creep rupture damage. The detailed methods used in the Code for both elastic and inelastic analyses are described. Introductory remarks regarding the evolving technology of flaw evaluation are also given.

2. Design Of Pressure Vessels for Elevated Temperature Per ASME Code
Historically, the ASME Code criteria’ were first formulated for vessels in elevated temperature service. The first ASME Code, issued in 1913, was written to prevent catastrophic explosions of steam boilers. Such failures were frequent occurrences near the turn of the century, in the early industrial developments of the United States and world-wide. The Code currently includes many sections related to design, construction and inspection of boilers and vessels. 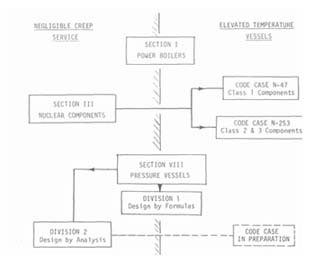 Design by Analysis was first introduced in Section III – Nuclear Power Plant Components. Although plastic analyses can be included in the structural evaluation, the acceptibity is essentially based on elastic analysis of stresses and strains in the entire components for cyclic load histories of mechanical and thermal loading. The Tresca Minimum Shear Theory is used as the failure criterion. The stresses are categorized into the general primary membrane, local membrane, primary bending, secondary stresses and peak stresses. Operating conditions are separated into Levels A, B, C and D in order to establish appropriate limits on loading conditions, stresses and stress ranges. Division 2 of Section VIII of the Code was introduced in order to extend the principles of design by analysis to non-nuclear components. Pressure vessels and components designed by analysis generally have a higher degree of demonstrated safety and reliability. For nuclear components operated at elevated temperatures, the ASME Code has been by Code Case 1331 and its successor, Code Case 1592 and the current Code Case N-47. These Code Cases include comprehensive design analysis and acceptance criteria for vessels intended for elevated temperature service. Some simplifications and alternative criteria for Class 2 and 3 components are given in ASME Code Case N-253.

Various topics in pressure vessel design may be found in our Publications.