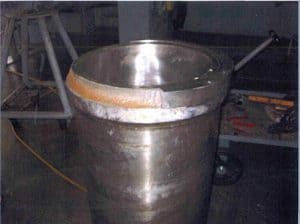 We were asked to perform a failure analysis on a cracked cylinder liner. A client had manufactured 18-inch replacement cylinder liner for an engine used to compress natural gas. During the installation, the liner cracked and subsequently fell into the engine block – causing damage.

The investigation included an evaluation of the cylinder sleeve with two shoulder support configurations and a modified radius design. We developed a finite element analysis model to focus on the location of the shoulder radius near the block interface during installation conditions, since the fracture occurred in this region. Residual stress measurements were performed on a liner with the same design, and compared to an OEM liner.

These measurements were also used to determine if the heat treatment or machining processing could have had an impact on the liner failure. The measurements, along with finite element analysis (using nonlinear cylinder liner material properties) were completed as part of the second phase of the failure investigation. Metallography and fractography were also performed to characterize the failure, and determine if material anomalies contributed to the fracture.

For over 30 years, our team of engineers has been performing Failure Analysis Services for clients in
Energy, Mining and Oil/ Gas.