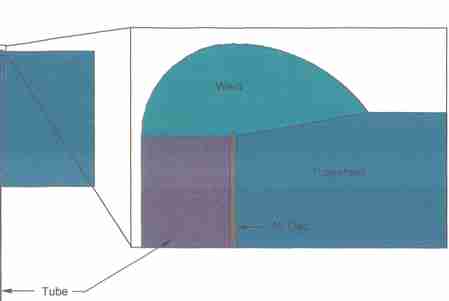 We investigated the root cause of cracked tube-to-tubesheet welds on a chemical reactor. This included the startup, controlled heatup and cool-down processes.

Finite element analysis (FEA) was performed to simulate the (transient) thermal and structural responses of the reactor tubes, tubesheets, perforated plate rim, and tube-to-tubesheet welds during the controlled heat-up and cool-down process.

The rate of 8 deg. F/hr was first used for heat-up and cool-down for both air and salt temperatures. The heat-up and cool-down processes were analyzed in thermal analyses. These results were then used at various time steps to calculate stresses in the tube-to-tubesheet weldments. The resulting stresses were not sufficient to cause leak paths in the weldments. Once acceptable stresses were achieved at a rate of 8 deg. F/hr, the rate was progressively increased and evaluated until a rate of 14 deg. F/hr was reached, and the stresses remained well within acceptable limits even for weldments with considerable porosity.

The Von Mises stresses and stresses in the radial direction from the center of the tube were determined for each analysis. These stresses are important in evaluating the potential for creating leak paths through the weldments.

We perform Weld Troubleshooting/ Consulting on components for clients in industries including energy, manufacturing and petrochemical. Give us a call to talk about your engineering challenges.