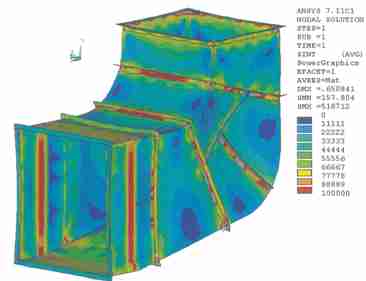 Premature weld cracking had occurred in exhaust ductwork. The cracking occurred in corner weld joints and in stitch welds used to secure the shell to stiffening angles approximately 3 weeks after it was placed in service. OCE performed a forensic analysis – evaluating the quality of construction/ welds and the design of the exhaust ductwork. Finite element analysis (FEA) and engineering calculations were employed to evaluate the thermal stresses.

The exhaust ductwork is used to convey high-temperature exhaust from large diesel engines through the roof to the atmosphere during engine testing and qualification. The diesel exhaust temperature is approximately 1100°F when it enters the ductwork. The hot exhaust enters the ductwork vertically. It then immediately turns 90 degrees at the lower elbow and travels horizontally for approximately 10 feet before passing through a second elbow (upper elbow) which directs the exhaust upward. The exhaust then travels upward through two silencers before exiting to the atmosphere. The region of the stack exhibiting cracking in the welds is from the exhaust entrance through the two elbows and up to the first expansion joint.

A major weld inspection was first performed. The shop applied welds were evaluated for size, length and location and had to meet the criteria specified as well as AWS 09.1: 2000 Sheet Metal Welding Code for weld quality. This code is primarily employed for the exhaust ductwork fabrication as specified by the
Sheet Metal and Air Conditioning Contractors’ National Association (SMACNA).

The two types of welded joints visually examined were the corner 1/8″ fillet weld which connects the stainless steel plates to form the shell of the exhaust ductwork and the 1/8″ fillet weld which connects the stiffening angles to the ductwork shell. A fillet weld is a weld of approximately triangular cross section joining two surfaces approximately at right angles to each other in a lap joint, Tjoint or corner joint. The inspection determined that the welds appeared to be thoroughly fused to both sides of the joints and the weld profiles were acceptable per 09.1 Section 6, Inspection of Arc Welding Work.