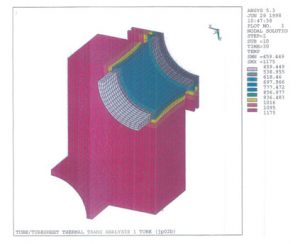 Analysis on the Design, Fabrication and Elevated Temperature Operation

We performed failure analysis on cracked tube-to-tubesheet welds on an Acid Plant Superheater operating at a smelter. Failure to isolate the Superheater resulted in extensive damage to other equipment further down in the process line.

The analysis was performed on the design, fabrication and elevated temperature operation of the Superheater. The startup and operation of the plant included transient conditions when saturated steam suddenly enters the hot tubes. The steam (which contains moisture) makes cooling of the tubes more intense. These tubes are welded to the tubesheet – and sudden contraction of the tubes is resisted at the weld by tubesheet lagging in thermal response. Subsequently, severe thermally induced stresses resulted at the root of the weld.

Historical data indicated that the operation of the Superheater between the first startup and the date of the accident indicated more than a thousand severe thermal cycles. This significantly exceeds the number of cycles which would be expected during startup.

Physical examinations indicated that a crack initiated at the tube-to-tubesheet weldment, then propagated through the tube wall. Steam leaked through the tube crack, then through the interface between the tube OD surface and the hole ID to the gas side of the tubesheet. The resulting aggressive environment (due to mixing of steam with SO3) damaged the tube near the tubesheet, causing the crack to grow through the wall. The increased amount of leaking steam, jetting under pressure through the hole, enhanced damage to the adjacent tubes.

Finite element analysis was performed to obtain temperatures and resulting thermal stresses and strains generated by transient conditions during plant operations. These results were used to evaluate low cycle fatigue damage caused by cyclic operation of the plant. The results of these analyses were used to perform an analysis of the tube-to tubesheet joint (as shown above).

The analysis showed that the superheater was designed in accordance with the requirements of the ASME Code and current engineering practice. Physical examinations and material testing confirmed that the materials used were compatible with the drawings and specifications, and that the tube-to-tubesheet joint was properly fabricated. Failure of the superheater tubes in the tube-to-tubesheet region was caused by cyclic thermal loads. Each startup of the Superheater generates thermally induced stresses, and the number of such cycles is limited if the plant is operated properly.

Cyclic temperatures for the gas and steam were used to establish boundary conditions for the tube-to-tubesheet finite element model. The results determined temperature distributions and complex interactions between the tubes and tubesheet. When the temperatures between the tubes and tubesheet are uniform, there is an interference fit created by the rolling process. However, the introduction of steam, which is at a lower temperature than the tubesheet tends to open a gap at the interface. Nonlinear finite element analysis determined that this gap opened and closed during the thermally cyclic loading. Fatigue analysis was then performed.

We perform thermal, stress, vibration, fatigue and failure analysis on components including vessels, piping and other process equipment.

Give us a call to talk about your Engineering Challenges.