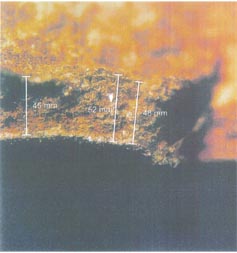 We performed a failure analysis on a commercial sprinkler pipe system, which had failed at a
pipe-to-pipe tee junction. NFPA 13 specifies that sprinkler systems using threaded connections must be threaded per ANSI/ASME B1.20.1, “Pipe Threads, General Purpose (Inch)”. This standard defines the dimensions of pipe threads for general purpose applications including tapered threads appropriate for this application.

The investigation included structural analysis and material/metallurgical testing. Measurement of the threads away from the failure surface and unaffected by necking clearly show that the threads were cut in accordance with ASME 81.20.1 and that the failure was not a result of as-built thickness deficiencies. We concluded that the failure of the pipe was due to tensile overload.

Resources
– Murals of Our Projects