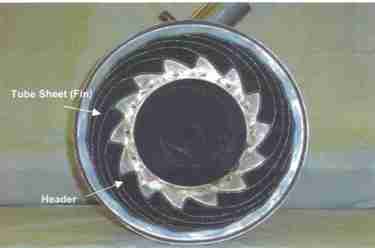 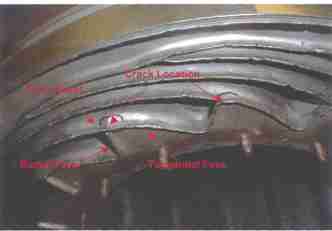 Cracks had occurred on Large Capacity Fuel Heaters (LCFH) during a 2000-hour service test after approximately 1000 hours of service testing. O’Donnell Consulting Engineers performed a root cause failure analysis and developed a redesign.

The heat exchanger was approximately 19 inches in diameter and 2 feet in height, and constructed of .0250 inches thick 321 stainless steel sheet metal. The Header was a 14-sided polygon to which the combustion tubes are welded. This configuration produces an edge weld joint type, where two .0250 sheets are placed side by side and the top surfaces are welded.

The weld joint surfaces were visually examined at moderate magnifications using an optical stereomicroscope. The cracks at both locations ran parallel with the weld along the fusion line between the weld toe and tube sheet (Fin) placing the crack at the front edge of the Heat Affected Zone. Further examination at a higher magnification using Scanning Electron Microscopy (SEM) techniques revealed parallel crack arrest marks that were indicative of a fatigue failure mode. The crack initiation site was at the underside of the weld at the T intersection. The crack grew from the inside out, through the tube sheet, traveling about equal longitudinal distances in both directions from the T intersection in the Heat Affect Zone of the tube sheet.

This strain range was substantially lower than the strain ranges needed to cause the observed cracking. Accordingly, strain concentration and metallurgical notch effects played a very significant role in the cracking. Strain concentration effects are a function of the design details and fabrication details. Metallurgical notch effects included the heat affected zone microstructure as affected by welding heat input as well as the difference in plastic flow and creep properties of the weld metal, HAZ and base metal.

The design itself included strain concentration effects due to the geometry at the welds. It would be very difficult to design such a light-weight heat exchanger avoiding such strain concentrations. However, fabrication details including fit-up, purging, weld preparation and welding processes play a major role in determining the resulting fatigue design life.

The automatic, cyclic thermal operation of the unit resulted in about 3 x 104 significant thermal cycles in 1,000 hours of operation. The strain ranges computed by finite element analyses were less than 0.1 percent not including local strain concentrations or metallurgical notch effects.